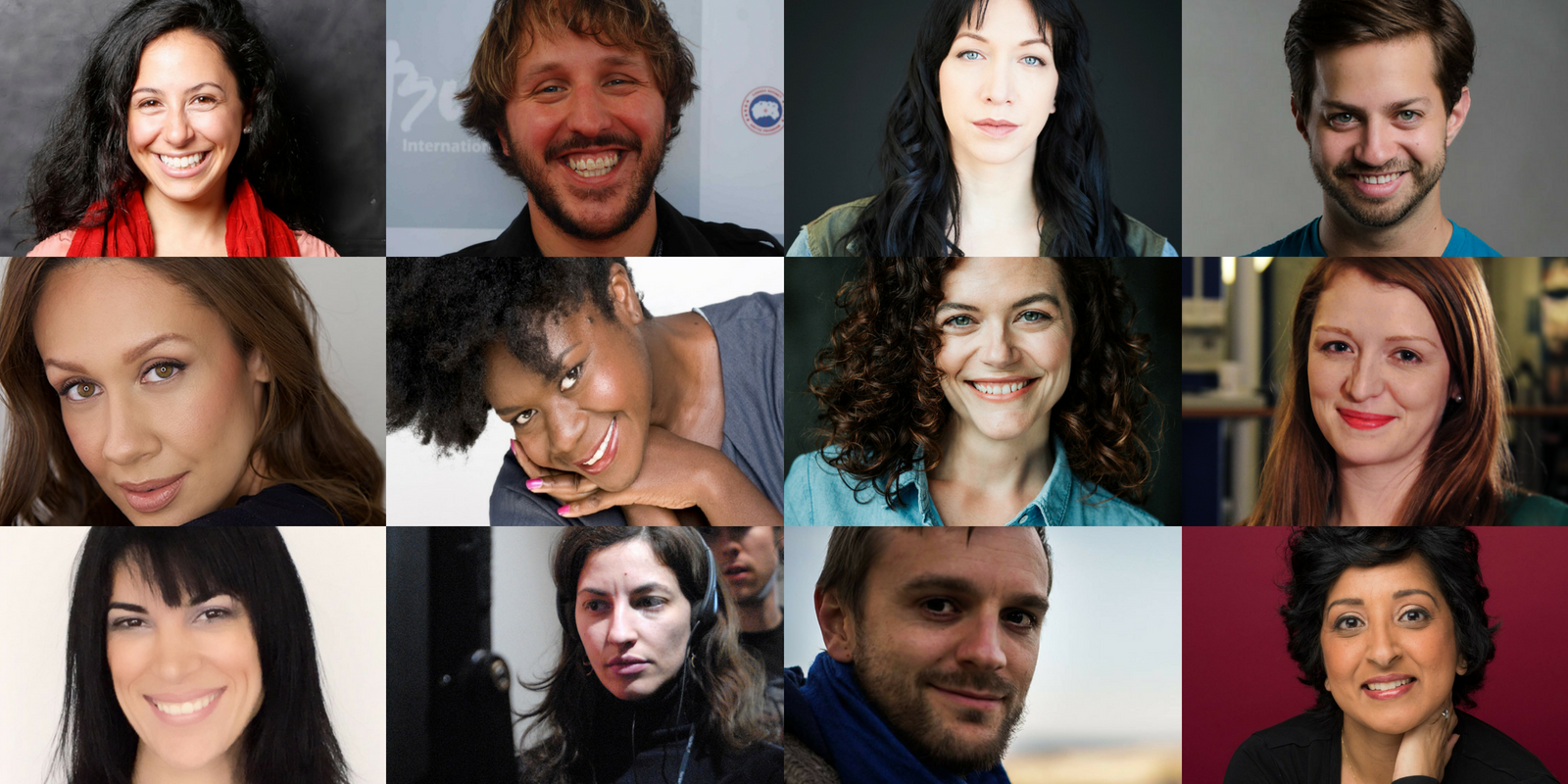 Areas to be covered include: script development, casting, audience engagement, discoverability, budgeting and financing, and persuasive pitching. In addition, invited guest speakers will share practical tips and best practices through case studies that highlight their experience in digital series production. Following completion of the in-class sessions, participants will take part in a camera information session.

“Given the growing prevalence of and appetite for original short-form digital series, as well as additional funding opportunities, WIFT-T was thrilled to be able to step up and offer this program. The content creators we’ve brought into the room for these four days are a stellar example of the talent pool here in Ontario, and WIFT-T looks forward to aiding them to bringing their projects to fruition.”

The selected teams & projects are:

Jenna MacMillan is a producer and director from Charlottetown, Prince Edward Island. An alumna of Ryerson University, Jenna has worked as a production manager and postproduction supervisor on several television, feature film, and digital media productions for a variety of broadcasters (Netflix, CBC, BBC, Cottage Life and NFB). In the past four years, she has shifted her focus to directing and producing her own stories. Her films have been funded by the National Screen Institute, Harold Greenberg Fund, National Film Board, and The Movie Network. Jenna's award-winning short films have screened at festivals internationally and have been broadcast by CBC. Her music videos have been released via Vice, Exclaim! and CBC. Recently, Jenna won an East Coast Music Association (ECMA) award for her music video, Microphone (KINLEY). The video has been incorporated into the Grade 9 Health Curriculum on Prince Edward Island to teach students about the importance of sexual consent. Jenna is committed to telling stories about people whose voices have been silenced. She is deeply passionate about shedding light on mental health awareness, a recurring theme in most of her projects. She has several exciting television and film projects in development.

Thom Smalley is a British-born filmmaker now based in Canada. He has edited several digital series including the Emmy Award winning Guidestones, the CSA-nominated Played, and the Canadian Comedy Award-winning Just Passing Through (Season 2). Thom has also worked on several short documentaries including the Hot Docs award-winning and Academy Award long-listed, Prince’s Tale. He has also written and directed several short films including Double Tenancy (winner, Best Short Film, London Indie Fest) and Desperately Seeking Signal (winner, Best Film, New Orleans Edge Film Festival and Durham Region Film Festival). Thom is a founding member of Tiny Town Media, a production company based in Prince Edward Island. At the moment, he is working on several projects including a documentary series for CBC Digital, as well as a movie-of-the-week for the Hallmark channel.

Sedina Fiati is a writer and performer for stage and screen. She holds a BFA in Music Theatre from the University of Windsor; and is currently transitioning from a 12-year plus career in theatre as a performer, producer, and creator to a screen-based career. On screen, Sedina has appeared in several short films which have screened in festivals all over the world including I Love You, Muna. She also plays the title role in the new upcoming web series, Super Zee. Her shorts BWAHM and Take Five have appeared in several festivals. Sedina is currently the co-chair of ACTRA National's Diversity Committee and was the co-chair of ACTRA Toronto's Diversity Committee for 4 years. In that latter role, she co-created the Sandi Ross Award, and the Share The Screen campaign.

Samora Smallwood is a producer, writer, and actor. She has produced films (Chrysalis and Buddy) and her series, Gone, is currently in pre-production. On screen, Samora's most recent work includes an upcoming recurring role on Syfy's The Expanse, as well as roles on Suits, Designated Survivor, and Shadowhunters. Samora's emotionally complex role in The Shelter—a dystopian thriller—premiered on Amazon in early 2018. Samora is a graduate of the University of Windsor’s BFA program with a Minor in French Studies and a certificate in Women’s Studies. She is the current co-chair of the ACTRA Toronto Diversity Committee.

Kulbinder Saran Caldwell is the founder of REALLIFE Pictures, an award-winning music video production company in Vancouver, BC. The company recently expanded into REALLIFEpics, a coaching program which helps young female filmmakers, particularly women of colour, bring their stories to the big screen. She is currently in development on children’s animated series The Legend of Linova with award-winning writer/director/producer Jupiter J. Makins.

An award-winning filmmaker and published author, Jupiter J. Makins has a passion for telling stories. She has written, directed and produced films that are selling internationally. Her feature film, Bigfoot and the Burtons was recently licensed by Showtime, and her short film Bully Fighters premiered on ShortsTV.

Marie-Marguerite is an actor and producer. She is a Sundance and YouTube New Voices Fellow, a Works4Progress Participant Media, and NYTVF official artist. As an actor, Marie-Marguerite has starred in projects with Fox, MGM, and ABC. Credits include Oscar-nominated Incendies, ABC’s Picture This, and FOX Kid’s Galidor: Defenders of the Outer Dimension. Her writing and producing credits include La Belle Solution (Webby), Qu'est-ce que le fuck, and Quel Etage. As an impact producer, Marie-Marguerite led the Purpose Climate Lab, a story incubator moving new audiences on climate with targeted short-form content. Before that, she worked as an advisor to the island of Nauru at the UN. Marguerite holds a BA in Film & Cultural Studies from McGill and an MPA from Columbia. She also trained at the Upright Citizens Brigade and the Neighborhood Playhouse School of Theatre. Business Insider called her action figure (from her Galidor Days) Lego’s most heinous offense.

Chris Agoston is an award-winning producer and director. An alumnus of the Canadian Film Centre, the Berlinale Talent Campus, and the TIFF Studio Producer's Lab, Chris has produced and directed a wide variety of short and long-form properties. He produced and directed The Plateaus, a web/broadcast comedy series for CBC. In film, Chris' last two features as a producer have garnered significant awards attention within Canada. The Newfoundland based drama-fantasy Cast No Shadow, directed by Christian Sparkes, won 6 Atlantic Film Awards and was nominated for 4 Canadian Screen Awards including Best Picture. The Lockpicker, a coming of age drama by Randall Okita, won Best First Feature at the Toronto Reel Asian Film Festival and the first annual edition of the Discovery Award (Canadian Screen Awards). Chris is based in Toronto, where he is also an active member of the Director's Guild of Canada as a 1st Assistant Director.

Sonya Di Rienzo is a Toronto-based filmmaker. After spending formative years working at renowned international film festivals such as TIFF, Sundance and SIFF, Sonya moved to the production side of the industry. She has since produced short films, documentaries, multi-platform and television projects, including co-creating and producing the anthology Little Films About Big Moments (HBO Canada). Her director/writer debut, The Translator (TIFF 2010), has gone on to play domestic and international film festivals and was a Lunafest award recipient. A TIFF Talent Lab alumni, Sonya has worked at award-winning production companies such as Rhombus Media and Whizbang Films—where she was the director of development—before joining Hawkeye Pictures (Sleeping Giant, Mary Goes Round) in 2017, as a producer. She is currently developing a varied slate of features, television, and web content, including penning the multi-platform web series Nightcrawlers, an electronic musical.

Lara Mrkoci is a video editor, actor and writer living in Toronto. She edited the award-winning short film Static (directed by Tanya Lemke; starring Yannick Bisson and Eric Peterson) and has worked on History Canada's adventure series Curse of the Frozen Gold, lifestyle series Reno, Set, Go! and Bravo's Yours, Mine or Ours. Lara has also edited behind-the-scenes featurettes for Rookie Blue, Saving Hope, and Bruce McDonald’s feature Hellions. As an actor Lara has appeared in the CW's Reign, in the indie horror flick Save Yourself and in the webseries Allie and Lara Make a Horror Movie. Lara also has a long list of commercial credits, most recently appearing in national campaigns for Haribo Gummy Bears and Bank of the West, as well as an international campaign for Lysol. A graduate of York University's film production program, Lara has also written and produced her own stories. She recently workshopped a short play called Care Giver at the Grand Theatre in London, ON, and is currently writing a webseries called Hey Guys! She has produced two independent short films, Six Stitches and Based on a True Story.

Rebecca Grenier is a writer and actor from Ottawa, Ontario. She moved to Toronto to pursue a career as a stand-up comic but quickly realized she had a deeper love for storytelling in the film and television mediums. Rebecca studied sketch and spec writing at Second City and screenwriting at George Brown College. She recently finished production on her first short film Yogurt and is in pre-production on her second short film titled When You Left Me. Late 2017 was capped off with a bang when her half-hour comedy pilot Green Recruitment was optioned. Rebecca is the recipient of the 2018 Magee TV Diverse Mentorship Award in which she will be working with mentor Duana Taha.

Lucas Fox is a Toronto-based film and television actor. He began acting in 2008 while attending Carleton University, where he earned a role in the independent film Anno Domini 3048 directed by fellow student Chris Finnigan. After this experience, he began studying acting both at Carleton University and A.C.T. Ottawa. Upon returning to the Greater Toronto Area, Lucas furthered his on camera work at George Brown College and studied improv at Second City. In 2016, he began stunt training with The Academy of Dramatic Combat. Lucas has been involved in numerous short films and web series in the Toronto scene. Most recently, he starred in the short films The Big Speaker Scam (2018) and Clean Ice (2018).

Following completion of the in-class sessions, participants will take part in a camera information session. Through instruction and hands-on opportunities, this 4-hour session is designed to familiarize participants with the various uses of and differences between the most popular cameras. This hands-on module will provide teams with valuable insights into the creative uses of the equipment as it pertains to their project and its impact on both the creative development and financing/budgeting considerations.