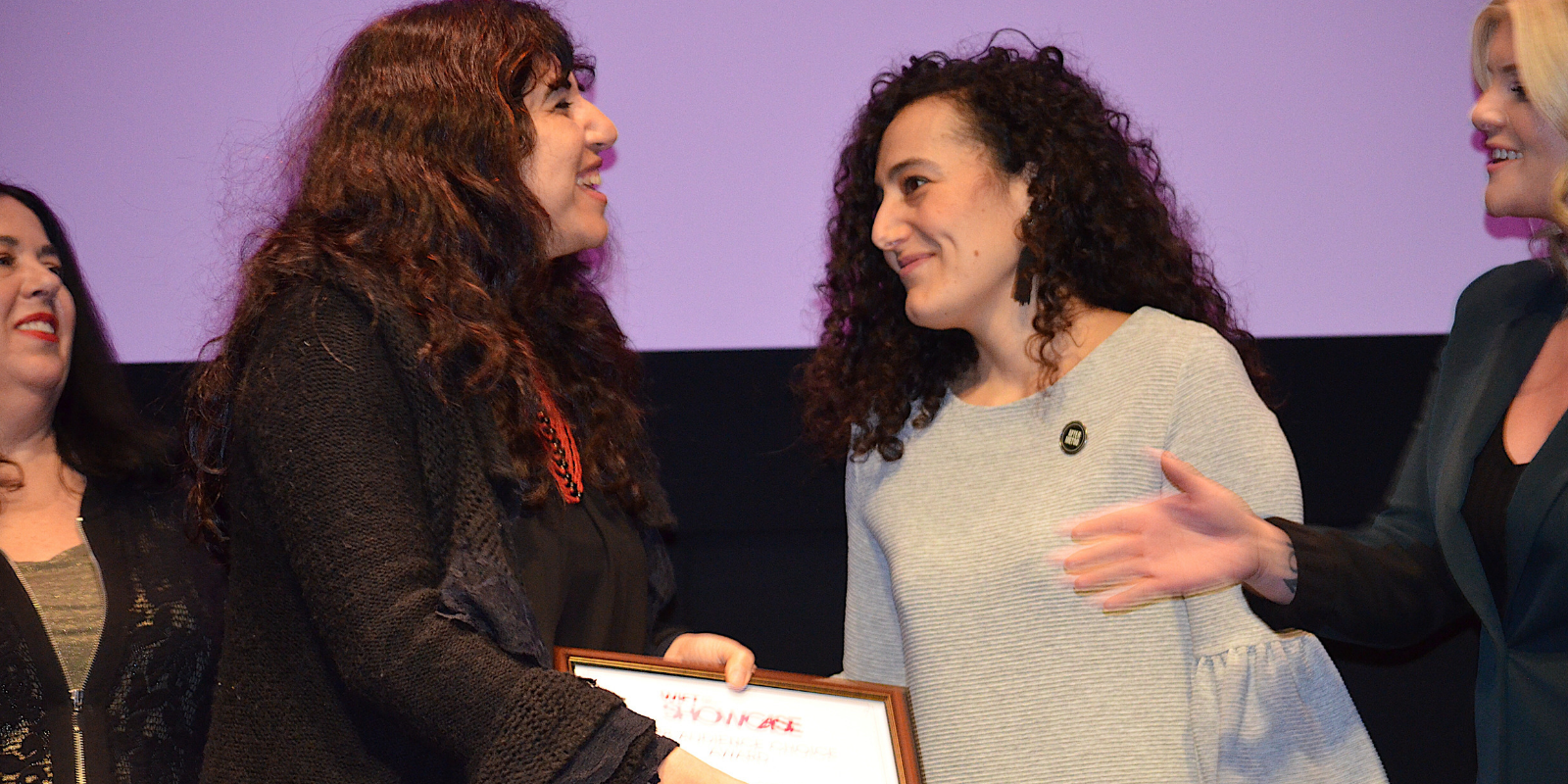 Filmmaker Reem Morsi on how winning both the Audience Choice at Best Screenplay awards at our 9th annual WIFT-T Showcase "made a big difference" for her and her team.

At our Showcase in April, writer-director Reem Morsi won two of our three awards: Best Screenplay and Audience Choice. The film, The Door—a meditative short about grief, displacement, and family—was a clear winner. For the first time, we were able to present cash prizes through our Foundation thanks to a successful 2017 donation-matching campaign supported by Hollywood Suite. Reem and her team won a total of $3,000 in cash prizes, and in-kind services valued at $5,500 from Dazmo Camera and Dufferin Gate Studios.

We caught up with Reem recently to chat about her participation in the Showcase and how winning made a big difference:

The Door is a short film that was made by the passion and hard work of a dedicated cast and crew. We all believed in the story and the meaning it was trying to convey. The short was produced by the Canadian Film Centre, meaning it was created by volunteers. When we won the Audience Choice and Best Screenplay awards at the WIFT-T showcase, it was an amazing experience, as it was a recognition of the team as a whole. The two cash prizes were shared between myself as the writer-director and the producer Heidi Tan, the composer Ava Kibalian, the editor Ben Lawrence, and the co-writer Kaveh Mohebbi, which for independent filmmakers like us makes a big difference, as we all volunteered to create The Door.

It felt incredible to be recognized for our efforts when the audience voted for The Door and people approached us at the reception to tell us how much they enjoyed watching it.

Reem also shared how WIFT-T has impacted her career development:

This was not the first time that WIFT-T has supported my career. In the past, another project I co-wrote with producer Sally Karam, was short listed for the BravoFACT Pitch Competition, which WIFT-T ran in 2016 and 2017. We received pitch training and mentorship, and eventually won the pitch competition. We were finally able to produce Show & Tell with an all women crew and lead actors. The film went on to win audience choice awards at many festivals, and screened at the 2017 Yorkton Film Festival, where it won Golden Sheaf Awards for Best Director, Best Short Subject and Best Emerging Director. WIFT-T has been a huge support for networking, training and realization of my projects. I am shooting my first feature Hate in early 2019, as part of the Telefilm Talent to Watch Mircobudget program. We are planning to use some of the in-kind rewards (courtesy Dazmo Camera and Dufferin Gate Studios) we received at the WIFT-T Showcase to help us produce Hate which is very connected to Show & Tell and is produced by Heidi Tan, with Sally Karam & Rula Nasser (also a WIFT-T member) as executive producers.  WIFT-T has been involved in the development of my career from creation to production and recognition. My team and I highly appreciate it.

We excitedly look forward to following what's certain to be a long and successful career for Reem. We thank Hollywood Suite for their continued support, allowing us to Fuel the Change for women like Reem.

You can watch The Door on CBC Gem, Canadian Reflections (season 1, episode 145): watch.cbc.ca.

Reem Morsi (IMDB) is a recipient of The Academy of Canadian Cinema and Television's inaugural Apprenticeship Program for Women Directors, through which she shadowed the director of The Handmaid's Tale on a block of episodes. She is also a past participant of Women in View's 2xMore 2017 Director's Lab, where she shadowed on and directed an episode of Sinking Ship Entertainment's series Dino Dana.

Reem’s film credits include Their Feast (2012 - Cannes Short Film Corner, TIFF, BBC, Cine Sud), Nostalgia (2015, which screened at the WIFT-T Showcase), among others. Several of her short film scripts were named finalists of the Robert Bosch Foundation Film Prize, an affiliate of the Berlin Film Festival. Other shorts include The Door (2016), which screened at Whistler Film Festival, Cascadia, WIFT-T Showcase, Mosaic MISAFF17 and many others; and won Best Drama at the 2017 Yorkton Film Festival.

In March 2016, Reem received a prestigious script-writing grant from the San Francisco Film Society for her feature film Bootleg.