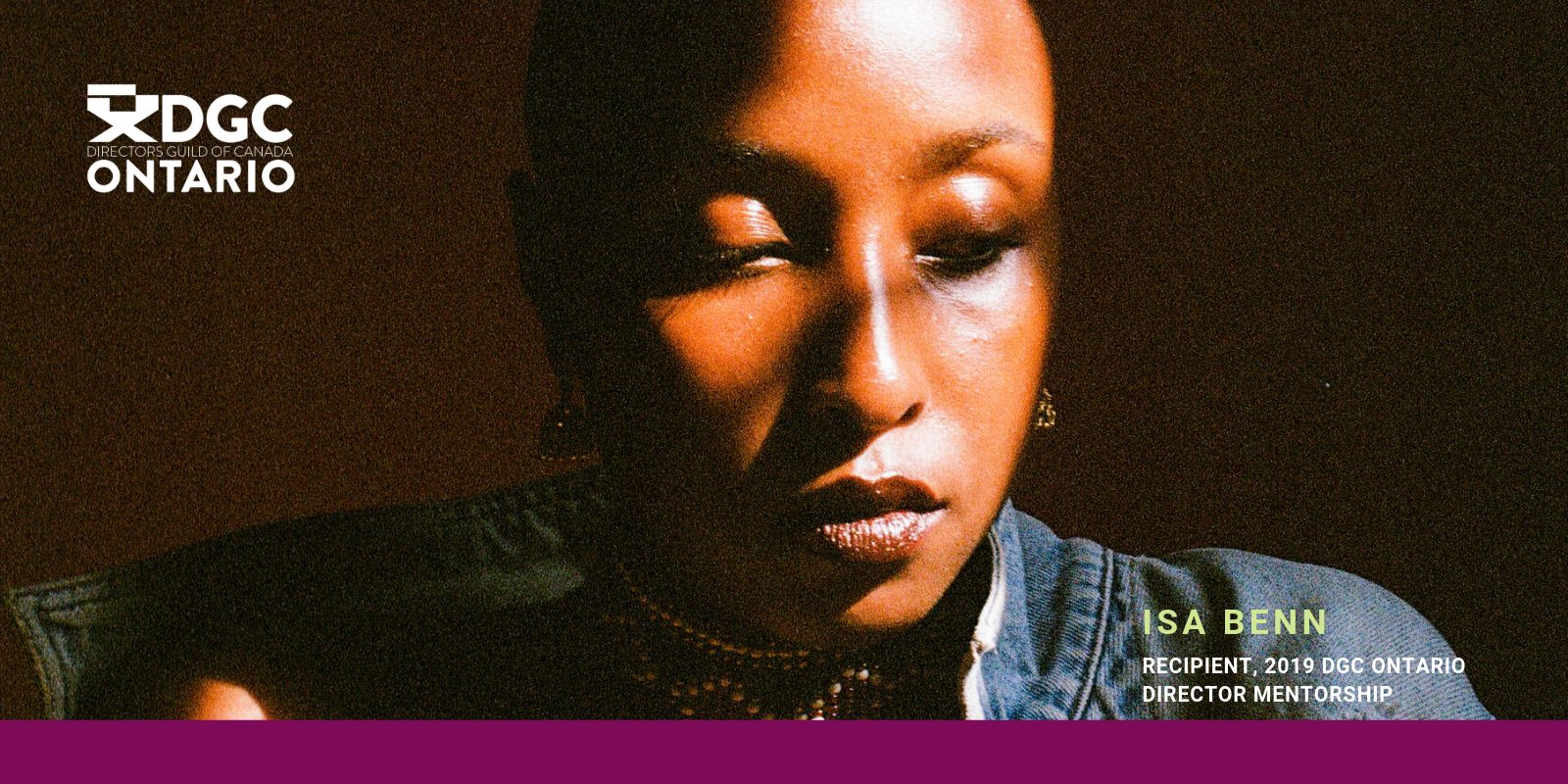 Benn will receive a complimentary Industry Pass to attend the 2019 Toronto International Film Festival, September 5-15. She will also participate in one-on-one meetings with executives from Mongrel Media and Entertainment One. Past mentors include: Tom Alexander (Mongrel Media) and Christina Kubacki (eOne).

"I am so grateful for this WIFT-T and DGC opportunity and the chance to be able to soak up the knowledge of other industry professionals. As a queer, racialized woman, these kinds of programs make all the difference in breaking down the barriers that stand between talent and opportunity."

Isa Benn is an award-winning filmmaker, screenwriter, playwright and multimedia artist and creator. She approaches each project with a sensitivity and perspective that is as resonant as it is unique. In light of several highly visual sensory “handicaps”, including synesthesia, Asperger’s and ideasthesia, she has found a mode of exploring the human experience that is unparalleled. Benn is uniquely able to connect to and penetrate her audience’s emotional barriers and facilitate a collective cognitive experience that leaves audiences feeling connected, healed and with greater awareness of a world outside of themselves. Moreover, Benn draws upon her experience as an African and Caribbean Canadian woman to create stylistically introspective works that shed a harsh light on the racism, decolonization, colorism, ableism and attacks on queer bodies that are rampant in North American society. Benn is an alumna of the CFC's Cineplex Entertainment Film Program Directors' Lab (2018), ReelWorld Film Festival's Emerging 20 program (2017), and Ryerson University (2012).

“At WIFT-T, our goal is to highlight the diverse possibilities existing in the industry and provide the tools needed for women, like Isa, to emerge and thrive as vocal, innovative, and visionary leaders in Canadian media. We are extremely grateful to our partner, DGC Ontario, for continuing to help us achieve our key mandate through this unique mentorship, and for their commitment to women’s advancement behind the camera.”

“We are very proud of our enduring collaboration with WIFT-T on the DGC Ontario Director Mentorship Program. Opening doors for female directors and creating opportunities for their artistic growth is a responsibility we at the Directors Guild take seriously. The caliber of applicants was outstanding this year. Isa Benn, our 2019 recipient, has a highly unique perspective of the world and we are deeply proud to support her expansion as a filmmaker in every way we can.”

For the first time, a jury consisting of DGC director members selected the recipient of this mentorship. The inaugural jury included: Molly McGlynn, Rama Rau, and Linsey Stewart.

“I've had so many great opportunities at the beginning of my career and I hope to be involved in extending other women the same. Isa is a special filmmaker. Her passion, optimism and point of view are exactly what the industry needs more of. I can't wait to see her fly.”

“Being on the DGC Ontario jury and selecting a promising director is a hugely satisfying process because it gives us a chance to actively make sure women directors, especially people of colour have a chance to have their voice heard. I'm thrilled that Isa is this year's recipient. This mentorship will help her hugely in having her vision confirmed and give her the confidence and contacts she needs to tell her stories. I'm looking forward to see what she will achieve in the next few years.”

Molly McGlynn is an award-winning writer and director working in Los Angeles and Toronto. Her first feature film, Mary Goes Round, premiered at the Toronto International Film Festival (2017) and went on to win several awards including the Panavision Independent Cinema Award at the Santa Barbara International Film Festival. Her directorial television credits include Workin' Moms, Little Dog, Bad Blood, Speechless, Grownish and Bless This Mess. She is an alumna of the Cineplex Entertainment Film Program Writers' Lab at the Canadian Film Centre and TIFF Studio. She is currently a director on ABC's Bless This Mess (season 2).

After finding success in directing documentary, Rama Rau brings the pulse of vérité to the narrative pull of fiction. In her award-winning fiction feature, Honey Bee, starring Julia Sarah Stone (Allure) and Martha Plimpton (The Good Wife, Blacklist), Rau draws on a documentary sensibility to create strong cinema, tackling a character-driven, fast action story with gritty, handheld vitality. The film won Best Film awards at both the Whistler Film Festival as well as the Canadian Film Festival. Her epic documentary, The Daughter Tree, had its World Premiere at Hot Docs (2019) to excellent reviews. Rau made a name for herself as a pioneer in employing all-female crews on her film League of Exotique Dancers, Opening Night film at Hot Docs, North America's largest documentary festival (2016). She is currently in development on a slate of both features and series.

Linsey Stewart is a Writers Guild of America (WGA) award-winning writer/director that premiered her first feature film, I Put a Hit on You, at Slamdance with her creative/life partner Dane Clark, and was released by Mongrel Media. Together they’ve made several shorts, including Long Branch and Margo Lily, both of which became Vimeo Staff Picks/Short of The Week winners, as well as Bickford Park, which premiered at TIFF in 2017. She’s also been a staff writer on the CBC shows Being Erica and the last three seasons of Mr. D, where she also directed an episode. They’re currently developing their next feature Merv with Matt Baer Films and adapting the critically acclaimed young adult novel Ms. Bixby’s Last Day with Gunpowder & Sky and Walden Media.

The Directors Guild of Canada in Ontario is the provincial organization which represents more than 2,600 freelance key creative and logistical personnel who play an intrinsic role in the Film & TV production industry. We are the Emmy nominated directors, Oscar nominated production designers and BAFTA nominated editors who make the magic of the movies possible. We are also the First Assistant Directors, Location Managers, Art Directors, Production Managers, Key Accountants and every one of their assistants. DGC Ontario has fiscal, artistic and logistical responsibility for the entire production and we are the screen industry’s most integrated trade union. No other organization in the world, represents as many artistic and management principals under the same agreement as the Directors Guild of Canada in Ontario.